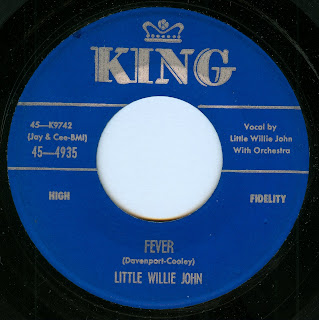 No less an authority than James Brown once said, "Little Willie John was a soul singer before anyone thought to call it that".  His original version of "Fever" inspired Peggy Lee to record it. He had 14 hits on the R&B charts between 1955 and 1961, and an equal number of hits on the pop charts. He appeared on "American Bandstand" and "Route 66". Unfortunately, he was also convicted of manslaughter in 1966 (even though it was never proven that he killed anyone) and died in prison at age 30 in 1968.

On Sunday, July 17th, WFDU-FM's "On The Record" with Richard Sibello will pay a 2-hour tribute to the singer who influenced many of the future stars of soul, including James Brown and Stevie Wonder. We'll be playing many of his hits, his forgotten masterpieces, and selections from his doomed 1966 session for Capitol Records (which stayed unreleased until 2008).

We will be interviewing author and journalist Susan Whitall, who has written a new book on the life of this incredible performer, entitled "Fever: Little Willie John - A Fast Life, Mysterious Death and The Birth Of Soul" (available now at www.amazon.com).

Not only that, but we will also feature an interview with Little Willie John's two sons, Kevin and Keith John, who will share their personal memories of their father and his music.