CHARLIE LOUVIN - I DON'T WANT IT 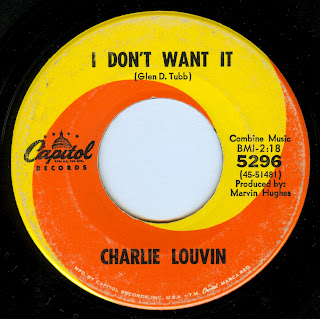 January 26, 2011 was a very bad day for good music. We lost two great, but vastly underrated singers - Gladys Horton and Charlie Louvin. Gladys, of course, was one of the two lead singers of the Marvelettes, along with Wanda Young, but Gladys was the lead on all the early hits, including Motown's first-ever #1 national hit, "Please Mr. Postman". Gladys' importance to the story of Motown Records can not be overstated, and yet, here in 2011, her passing is listed by the media as nothing more than a footnote.

I was first introduced to Charlie Louvin by my father's collection of old reel-to-reel tapes. My favorite toy when I was a kid was my dad's JVC reel-to-reel tape player. I would play his old tapes and marvel at the unknown songs (Dad never listed anything on the tape boxes) that would come out of the speakers. Eventually, as my musical knowledge increased, I began to recognize a lot of the rock and roll songs my dad recorded off of friends' records and off of AM radio. But there was one tape which had about half an hour of C&W sides recorded off of radio station KXCN ("serving St. Louis and Festus") in 1966. Since my dad was doing his tour of duty in Vietnam that year, I couldn't figure out how he recorded this. One day I asked him, and he said his best friend Bobby recorded this when he himself was stationed in St. Louis during the war.

There was incredible stuff in that half-hour: Connie Smith's "The Hurtin's All Over", Porter Wagoner's version of "Ole Slew-Foot", "I Hear Little Rock Calling" by Ferlin Husky, "Send Me A Box Of Kleenex" by Lamar Morris - and "The Proof Is In The Kissing" by Charlie Louvin.

Since I knew NOTHING about country music at the time, and, as usual, nothing was listed on the tape box, it took me many, many years to track down those records (in fact, there's still one on that tape I haven't found, because I don't know the title or the artist to this day). But when I did, I developed a taste for 50s and 60s C&W that only gets stronger as the years go by (it also helps that I have a girlfriend who is a country music junkie).

Anyway, here's a little history: Charlie Louvin (real name: Charles Elzer Loudermilk) was born on July 7, 1927, in Rainesville, Alabama. He and his brother Ira grew up in nearby Henegar, AL. Ira played mandolin and Charlie played guitar, patterning themselves after such "brother" acts as The Blue Sky Boys and The Monroes. In 1943 the brothers (after a stint with the Foggy Mountain Boys) won an amateur contest in Chattanooga, Tennessee, the prize being their own morning radio show. Eventually their radio program would move to Knoxville, Tennessee's WNOX, where they became featured artists on the station's most popular program, "Midday Merry-Go-Round". All this exposure led to a contract with MGM Records in 1949, but their recording career came to a halt when Charlie got drafted and went to fight in Korea. After Charlie returned, their good friend Fred Rose (of Acuff-Rose publishing fame) convinced them to sign with Capitol, since MGM was putting all of its promotional energies toward Hank Williams.

The move to Capitol was a good one, and by 1955 the Louvin Brothers were major country stars, and in 1955-1956 they had five Top Ten country hits - "When I Stop Dreaming", "Hoping That You're Hoping", "You're Running Wild", "Cash On The Barrel Head", and their only #1 country hit "I Don't Believe You've Met My Baby". They joined the Grand Ole Opry and soon became (strangely for the era) hot LP artists, releasing about 20 LPs between 1956 and 1962. Half of the LPs were of sacred songs, including the LP "Satan Is Real", which has become their most (in)famous LP because of the unintentionally hilarious cover. See it here.

Unfortunately for the Louvins, the word "production" began to creep into Nashville by the early 60s, and soon the pure backwoods sound of country was being "softened" for public consumption. Fiddles became violins, and Ira Louvin's mandolin was replaced by Chet Atkins' guitar. The pressures of "new Nashville" began to take its toll on the brothers, both professionally and personally (their relationship was always, to say the least, a bit shaky, especially since it was well-known that Ira could be a helluva mean drunk - and he was usually in the bag), and in 1963 they split up. Each brother started a solo career, and by mid-1964 Charlie had a Top Ten country hit with "I Don't Love You Anymore". Between 1964 and 1982, Charlie Louvin charted 29 times on the C&W charts (though he only had one other Top Ten hit, with "See The Big Man Cry" in 1965).

Ira didn't fare as well. Shortly after the brothers broke up, Ira was shot in an alcohol-soaked argument with his third wife, Faye. Shortly after his recovery (and a divorce from Faye), he married the girl singer in his show, Anne Young. On June 20, 1965, Ira and Anne were in the middle of a week-long series of concerts in Kansas City, Missouri when they were both killed in a car crash in nearby Williamsburg (though some sources list the location as Jefferson City, MO). It was only then that Ira had a country chart hit, with "Yodel, Sweet Molly".

Today's selection is one of Charlie's most rockin' sides. It was released as the B-side of Charlie's version of Roger Miller's "Less And Less" in November 1964. It's a really bluesy, "forget you, girl" number that has a strange (but cool) echoey riff on the bass and great drums. I hope you enjoy this and become inspired to hunt down other great Charlie/Louvin Bros. records.

Also, thanks, Dad, for letting me play with those reel-to-reels.